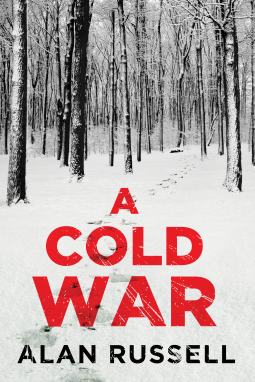 “Nothing could be more heart rending than this mute and motionless dispair” – ― Émile Zola, Thérèse Raquin

“She was a genius of sadness, immersing herself in it, separating its numerous strands, appreciating its subtle nuances. She was a prism through which sadness could be divided into its infinite spectrum.” ― Jonathan Safran Foer, Everything Is Illuminated

Despair. Horrible, gut wrenching, soul destroying despair. Nina Granville’s life has become a hell on earth unlike any most ‘normal’ people could ever understand. Fear so deep her bones ache with it. Because Nina is a captive. A captive of a monster in a land where ice, snow, and death are balanced on the head of a pin. Where the wrong breath, the wrong move, can mean immediate, or long, drawn-out death.

Captured and held in the wilds of Alaska by a sadistic monster, Nina is doing everything she can to survive, but the brutality is nearly unbearable, the psychological terror breathtaking. Nina is, very literally, in hell. A frozen hell, buried in ice and snow. Repeatedly raped, beaten and terrorized, she has little reason to continue living.

“There are strange things done in the midnight sun
By the men who moil for gold;
The Arctic trails have their secret tales
That would make your blood run Cold;
The Northern Lights have seen queer sights,
But the queerest they ever did see
Was that night on the marge of Lake Lebarge
I cremated Sam McGree.

Until she finds Elese Martin. Or at least, Elese’s journal. Elise – the madman’s last victim. Elise suffered as Nina does now. The beatings. The rapes. The terror. Elise, who was held on for years. Who had, and lost, a child by the monster. Who made a plan.

Now, Nina needs to plan. To plan, to hope.

This book was, literally, heart wrenching. Alan Russell literally broke my heart with his writing. Nina’s pain, her struggle, was written so well I felt it. The story is incredibly well-written, well-paced and the characters and landscape feel so very real I could almost smell the smoke, the cold, the forests of Alaska. There are so many layers in the book, layers that I fell through as if through water, sinking into blackness.

It is an important story, an important book, with strength and depth. I can’t recommend it highly enough, but be ready to feel Nina’s and Elise’s pain, their desperation and despair. It is breathtaking, twisted, and amazing.

I received A Cold War from the publisher in an uncorrected proof. All thoughts are my own, and I can’t recommend it highly enough. Strap in for the ride of your life.

Things To Think About Today

I will be working on editing all day today, but I wanted to give you something to think about while I am gone for a bit. The Pinterest posts below touched me, heart and soul. I hope they will also garner your interest, and give you something to think about. Women are pretty darn wonderful – and they get no respect. . . and Native Tribes? Well, we know what happened there.

These women have been footnotes in history and at least one of them was a model for women in James Bond books and movies. The women however have remained in the shadows of the stories of the Second World War. These women fade into history even though their actions were crucial in changing the outcome of the war.

Learn more about the author, buy the book, or follow them on social media:
Visit the Author’s Website.
Buy the Book On Amazon.

Author Bio:
These women have been footnotes in history and at least one of them was a model for women in James Bond books and movies. The women however have remained in the shadows of the stories of the Second World War. These women fade into history, even though their actions were crucial in changing the outcome of the war.

I haven’t read this book so can’t verify its excellence, but the idea of it interests me, and might interest you!

Please note: This information is provided by Awesome Gang at Awesomegang.com. Purveyors of some of the best free or low cost books on the web!

Check out their site by clicking above, or here. I receive an email of suggestions every day, and so can you!

Half The Sky: Turning Oppression Into Opportunity For Women Worldwide

Half the Sky by Nicholas D. Kristof and Sheryl WuDunn An old Chinese proverb says “Women hold up half the sky.” Then why do the women of Africa and Asia persistently suffer human rights abuses? Continuing their focus on humanitarian issues, Pulitzer Prize-winning journalists Nicholas Kristof and Sheryl WuDunn take us to Africa and Asia, where many women live in profoundly dire circumstances. – Audible.com

I am an Audible member, and today this is the “Daily Deal” from Amazon at only $3.95!

On a personal note, I am pretty much out for the count right now with new treatments. Better safe than sorry, right? So, I am only on occasionally until Monday.  For all my friends, Not To Worry – just a slightly elevated marker count.  I have my postchemo doctor’s appointment on Monday, and after that I am hoping to get back to full potential!