Ready To Return To Hell? Caith Morningstar Is BACK! 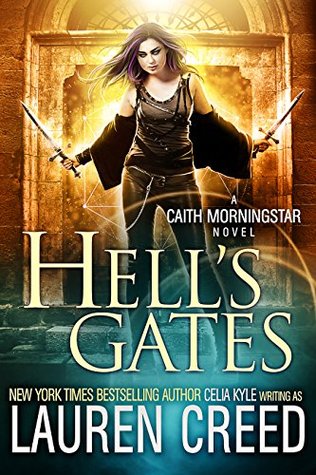 “I have always marveled that so many religions exact such revenge against dissenters. It only weakens the appeal of their faith and contradicts any claims they might have made that ‘all religions are basically the same.'” – Ravi Zacharias

Caith Morningstar was there when the first brick of the Mouse’s house was laid. Order. Secrecy. That is all she asked. Orlando is her city. Her place of peace, where demons (dems), angels (gels) and tweens (‘other’) come to rest, relax, and visit her bar, Hell’s Chapel. Well, when you are the niece of “The” Morningstar, have an unending life and a very, well, let’s say ‘eclectic’ family, you deserve a little peace. – Review, So, I Read This Book Today, Hell’s Chapel by Lauren Creed (Celia Kyle)

Caith Morningstar may desperately want peace in her city, and most particularly in her life – but as the Pussycat Dolls say,

Caith wished to be with her mate, Samkiel. So not happening. Half-fallen Angel of Destruction, On High had him in time-out on Earth for forgiving someone he wasn’t supposed to forgive. But when Sam saved Caith and newborn baby brownie Bryony, the last living member of Caith’s band of brownie friends, from a mad wizard with a true hard-on against Caith, he was cast down – as in, way way down, to the 9th circle of Hell. Well. That sucks.

After the violence, terror and death of Hell’s Chapel, Caith is incredibly pissed. Solution? Kick every stinkin’ demon out of Orlando. Hum… how’s that workin’ out for you Caith?

Apparently? Not all that well.

It has been a year, and Caith is bored out of her mind not having demon fanny to kick around in her bar, Hell’s Chapel. But she has baby Bryony to raise, she has her friends and her five fathers (don’t ask, just read ;-)) and life is moving along. Until baby Bryony gets sick. Now, there really Will be Hell to Pay.

Hell’s Gates picks up Caith’s story and runs with it, feet blazing. While you may know Celia Kyle better as a Paranormal Romance writer of such series as Ridgeville and Grayslake, and more recently her Alien-Shifter-SciFi series, The Ujal and Dragons of Preor, the Caith Morningstar series is quickly becoming my favorite overall. Caith is a 600-year-old, kick-ass half-demon with attitude to spare, a disturbing habit of killing first and asking questions never . . . and a heart as big and kind as five amazing fathers can make her. Well, even though her mother is the sister of “The” Morningstar, and “quite possibly the worst mother ever…” Caith knows one thing that all the demons in the world will never understand. Love. And when you mess with those Caith loves? Be prepared, cause she is gonna kill you. And bring you back to kill you again. And again. And Again. And when Caith decides you are going to hurt, you are going to hhuuuurrrrtttttt.

You will enjoy Hell’s Gates much more if you pick up Hell’s Chapel and read it first. Both are marvelous, but you can’t really understand what Caith has been through, what she has suffered, and why, unless you pick up from the first. Besides. These books are marvelous!!!

And you have no reason not to – Celia’s work is on Kindle Unlimited, where you can

I received Hell’s Gate from Celia in exchange for a realistic review. All thoughts are my own – and you know I won’t lead you wrong!

Besides my love for books, I am crazy about all kinds of music. Well, not country or western, but real music! Classical, jazz, blues, bayou zydeco, rock. The thing I like about a lot of the music is listen to the prose as much as the music itself.

A master of not only music, but prose, Bird has again struck lyrical gold with ‘Aprocrypha’.

While some of my days call for the hard core whiskey lyrics of Tom Waits or the techno edge of Laurie Anderson’s “Big Science”,the crash of Wilco’s ‘Bull Black Nova’, (or, yes, my guilty secret – Jamie Bergeron doing “That Butt Thang”) there is nothing better, in a thoughtful, introspective mood than the beautiful lyricism of Bird. And what other artist can make you actually smile by simply whistling? And a xylophone, of all things……

Bird is a master musician, but what I truly love is his skill with storytelling – prominent in his “Scythian Empire” and so very simply in “Spare-oh”.

Progressive, mesmerizing, and wholly lovely, you will listen over and over.

I adore animation. I have most of the Dreamworks films and am adding to my collection all the time. I am also a huge music lover and one of my favorites is Owl City. This video is Owl City and Yuna, a beautiful singer from Malaysia. I hadn’t heard of her before, but I will be tracking down her music soon!