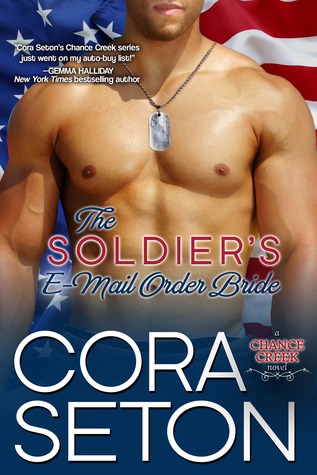 I have been reading some silly stuff this weekend – when I can’t sleep, sometimes the simple is the way to go – like with “The Soldier’s E-Mail Order Bride (Heroes of Chance Creek Series Book 1). Not that romance is ‘silly’, just that I have been doing the ‘serious’ thing for a while, so some lighthearted reading has been just the ticket for the weekend.

This book by Cora Seton made me laugh – hard. As in, I nearly dropped my reader in the tub, and drowned myself at that, laughing so hard!  This is somewhat of a trope – the mail order bride thing. Of course, updated for a modern ‘mail order’. The degree of humour in this book has it on my “watch for these” list.

The Hall brothers grew up at “Crescent Hall” on the Hall Ranch in Chance Creek, Montana. Until, that is, their amazing, loving father dies without warning. Suddenly they find themselves and their devastated mother stuck in Florida, their beloved ranch passed to their father’s brother, Uncle Zeke. Not that Zeke knows what to do with the ranch – other than let it run down. Now, Zeke is dead, and to keep the ranch from his useless son Darren, Great Aunt Heloise has decided to turn the ranch over to the boys – as long as they are married, and at least one new wife is pregnant, within the year. Kind of hard when each of the four brothers are in the military and posted in Afghanistan. What to do? Well, run an ad, of course – just like in the 1800’s when newspaper ads asked for mail order brides for cowboys, these cowboys need to find brides as well. Only, Afghanistan is quite a bit farther away from Montana. . .so brother Lieutenant Commander Mason Hall as put together an ad, and Colt, his youngest brother, and Zane and Austin, the twins, need to follow along – – whether they like it or not. And especially in Colt’s case, the not is the thing. An Air Force combat controller, Colt intends to remain in the Air Force, whether Mason wishes it or not. Zane and Austin are amenable – but since Mason is getting out first, the weight falls on him.

Regan Anderson is making huge changes in her life. She has quit her boring banking job to start a new non profit consulting job. She has moved into a tiny studio from her nice apartment in New York, and now she has her life planned out – including having a baby on her own, raising it on her own, and forget dating for the next 18-years. Of course, when she sees the ad on Facebook while watching her favorite movie, Pride and Prejudice, while celebrating her new life with wine (and then, when the wine runs out, tequila) she can’t resist answering the ad in the language of Jane Austin (and this is where I nearly dropped my reader in the tub laughing so hard I could barely breath). The things we do when we are on the sauce, right? Of course, her letter is hysterical, and completely meant as a joke – surely the hottie hot hotties in the ad aren’t really doing something so ridiculous – it has to be a scam! But hey, “In short, you are really hot. I’d like to lick you.” as the last line of her letter is the proper response to an ad that asks for Skills required-any or all of the following: Riding, roping, construction, animal care, roofing, farming, market gardening, cooking, cleaning, metalworking, small motor repair. . .

If you want a funny romance, that has not only humour but some really great serious parts as well, I recommend it. I read Seton’s original stories “The Cowboys of Chance Creek” and they were good, but I am looking forward to reading more of “The Heroes of Chance Creek” if they are as humourous and this one was – and in other places, so serious and thoughtful.