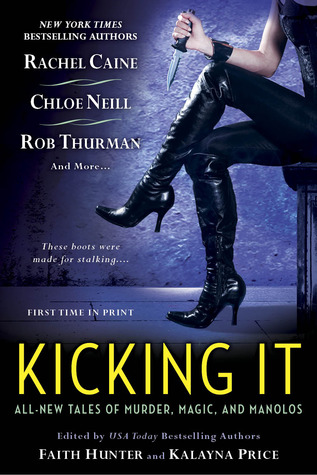 I love anthologies. Really love them. What a great way to learn about new authors, and pick up shorts by authors we love?

In Kicking It I got to enjoy some old favorites, but I also got to read some authors I wasn’t aware of, or whose stories I haven’t had a chance to enjoy. All the stories have footwear as the main theme – and what woman doesn’t love shoes? Well, I normally only wear an ancient pair of crocs, so I should probably say most women love shoes . . . but then, I do like looking at them, so I suppose that counts?

Rachel Caine is first up with Forked Tongues: A Holly and Andrew Story. It starts with one of my favorite opening lines: It wasn’t the first time I’d woken up to a cross burning on my front lawn, but it was definitely not my favorite time, either.

Holly and Andrew don’t exactly have it easy since Resurrection Witches are now verboten, and the testimony of the dead is no longer accepted in court. Given the superstitious and sanctimonious attacks on them, and other resurrection witches, it isn’t surprising when the burning cross leads to the body of a murdered friend.

Shannon K. Butcher is next up with Stolen Goods. Marcus Brighton has a problem. He needs something stolen, something he believes only Simone Solange can steal for him. In order to attract Simone’s attention, his offer must be impressive. Impressive enough to attract the attention of the world’s greatest thief. A thief who has already stolen from him once before… and is strong enough to face off against the Fractogasts – the monsters that murdered her husband and his loved ones as well. Filled with action, Simone is a kick-ass heroine with a quirky, feminine mien that makes her one of my favorite heroines in the anthology.

The Girl With No Name was my first introduction to Chris Marie Green. What a scary way to wake up – in a motel room bed, (though fully dressed, thank goodness for small miracles), and wearing a pair of boots made of vines. Oh, and with no idea of who you are… And those freakin’ boots won’t come off.

OK, it’s set in New Orleans, so it already has a foot up on my “gotta read” meter. And what happens is both painful – and hopeful.

The Devil’s Left Boot by Faith Hunter is set in the world of Jane Yellowrock, but focuses on The Seven Sassy Sisters – after the betrayal of the their older sister in the most vile, psychotic, demon-drunk manner possible. And now, son of a witch on a switch, an old enemy comes to them for help, bearing a kid goat and wearing a kickin’ pair of Manolo boots. The blood magic is back, and the girls need Jane once more, even though they still blame her for the death of their evil, blood magic using sister Evangaline. A great story, though I have pretty much given up on where Hunter is going with the Yellowrock series.

High Stakes: A Luc and Lindsey Story. I haven’t really read any Chloe Neill before, so this was interesting to me. Lindsey is a veteran guard for Cardogan House, home of nearly ninety vampires. And when you are an empathy, its hard keeping all that vampire angst out of your head. But being a guard doesn’t keep her from struttin’ her stuff in fancy manicures and clothes. And Luc, her boss, just brought her ‘the sexiest pair of boots she has ever seen.’ So, un-life is good. Well, until her great-great-great niece Rachel shows up at her door with a message from an old acquaintance. An acquaintance who is threatening Rachel’s life in order to draw Lindsey back to New York, back to a fate she thought long past. The same fate as her friends who were slaughtered back in the days of bathtub gin and speakeasies. Will Lindsey throw everything away? Her unlife, her love for Luc, who loves her so very much, and her happiness? And what from her past could possibly be calling out to her after all these years?

Another author to add to my list. I’m more of a ‘furry’ lover than a ‘bitey’ lover, but I will read more of her works.

The Parlor is by an author I hadn’t even heard of before, Lucienne Diver. I looked her up – she is the author of the Latter-Day Olympians series, which apparently follows the Rick Riordan school of ‘Olympian’s kids.’ In The Parlor we meet our heroine in a “Hooters-meets-space-brothel’ getup, complete with three-and-a-half inch Plexiglass stiletto heeled boots as she prepares to play waitress in order to get photos of her client’s “cheating-rat-bastard” husband cuddled up to a hussy. What a PI does to pay off the damage done by a singing fish possessed by Poseidon . . . sigh. But she is in for more than she thought when she walks in to The Parlor. At least she is a precog. But what is she sensing, creeping about the room?

Red Isn’t Really My Color by Christina Henry takes place between Black Night and Black Howl in her Black Wings Series. To be honest, the series has been on my list for quite some time, and I have now moved it up in order to start from the beginning. As the blurb for Black Wings, the first in the series, says, As an Agent of Death, Madeline Black is responsible for escorting the souls of the dearly departed to the afterlife. It’s a 24/7 job with a lousy benefits package. That is what drew me to the series in the first place. So, as this is a “middling” book, I skipped this one until I can start the series correctly.

Rob Thurman’s Snakeskin is set ten-years before the much loved Trickster series and in the same world, and introduces some of the secondary characters. What a treat! A lie can travel half way around the world while the truth is putting on it’s shoes. And a brilliant liar just stepped through the door – and her shoes? Oh, my. Trixa Iktomi has a new job now. And isn’t that grand?

Yep. Definitely moving to the top of my “my personal reading” reading list.

The final story in this anthology is Ruby Red: A Darque Files Story by Kalayna Price. Set in the Alex Craft universe, Briar and Derrick have a new job. To find the witch who is creating an unknown contagion – a contagion that causes it’s victims to move from healthy to comatose within twelve hours. So much for their promised vacation…

Rachel Caine is the #1 internationally bestselling author of more than thirty novels, including the bestselling Morganville Vampires series, the Weather Warden series, the Outcast Season series, and the new upcoming Revivalist series. She was born at White Sands Missile Range, which people who know her say explains a lot. She has been an accountant, a professional musician, and an insurance investigator, and until very recently continued to carry on a secret identity in the corporate world. She and her husband, fantasy artist R. Cat Conrad, live in Texas.

Shannon K. Butcher. Since launching her career in 2007, award-winning author Shannon K. Butcher has penned more than eighteen titles, including the paranormal romance series, the Sentinel Wars; the action-romance series, the Edge; and a handful of romantic suspense novels and works of short fiction. Being a former engineer and current nerd, she frequently uses charts, graphs, and tables to aid her in the mechanics of story design and to keep track of all those pesky characters and magical powers. An avid beader and glass artist, she spends her free time playing with colored glass and beads.

Chris Marie Green is the author of a new series, Jensen Murphy: Ghost for Hire, and the first book is called ONLY THE GOOD DIE YOUNG. She also wrote THE SHE CODE, a New Adult Single Girl (AKA Geek Lit) novel with artwork by Billy Martinez of Neko Press Comics.

Rob Thurman is currently writing three series for Penguin Putnam’s imprint ROC FANTASY, as well as a brand-new mainstream series for Simon & Schuster’s POCKET BOOKS.  Rob has also written for a Charlaine Harris & Toni L.P. Kelner Anthology, WOLFSBANE AND MISTLETOE. This year, Rob contributed a post-apocalyptic, “grim” faerie tale Western to the anthology, COURTS OF THE FEY.  Rob’s work is dark, non-stop action from beginning to end, rife with purely evil sarcasm as sharp as a switchblade – and probably nearly as illegal. If one shoved LORD OF THE RINGS, THE SHINING, and PULP FICTION into a wood-chipper, the result would be what Rob aims to deliver in a novel or short story.

Faith Hunter is an American author and blogger, writing in the fantasy and thriller genres. She writes as Faith Hunter in the fantasy genre, and as Gwen Hunter in the thriller genre. She also has collaborated on thrillers with Gary Leveille, jointly using the name Gary Hunter. Hunter is one of the founding members of the blog, MagicalWords.net, a writer assistance blog, and has developed a role-playing game based on her Rogue Mage series.

Chloe Neill was born and raised in the South, but now makes her home in the Midwest–just close enough to Cadogan House and St. Sophia’s to keep an eye on things. When not transcribing Merit’s and Lily’s adventures, she bakes, works, and scours the Internet for good recipes and great graphic design. Chloe also maintains her sanity by spending time with her boys–her favorite landscape photographer/husband and their dogs, Baxter and Scout. (Both she and the photographer understand the dogs are in charge.) You can learn more about Chloe by visiting http://chloeneill.com

Lucienne Diver is a long-time book addict, literary agent, writer, mom and sun-worshipper. She’s the author of the Vamped series of young adult novels following the humorous adventures of Gina Covello, fashionista of the damned. The fourth book in the series, FANGTABULOUS, comes out in January! (Following the first three, VAMPED, REVAMPED and FANGTASTIC.)

Christina Henry is a graduate of Columbia College Chicago and enjoys running long distances, reading anything she can get her hands on and watching movies with samurai, zombies and/or subtitles in her spare time. She lives in Chicago with her husband and son.

Kalayna Price writes the Alex Craft Novels, a new dark urban fantasy series from Roc, and the Novels of Haven from Bell Bridge Books. A USA Today Bestselling author, her works have been translated into several languages and are available (or have been contracted for release) in the US, UK, Australia, New Zealand, France, Poland, Russia, and Germany. Kalayna draws her ideas from the world around her, her studies into ancient mythologies, and her obsession with classic folklore. Her stories contain not only the mystical elements of fantasy, but also a dash of romance, a bit of gritty horror, some humor, and a large serving of mystery. Kalayna is a member of SFWA and RWA, and an avid hula-hoop dancer who has been known light her hoop on fire.