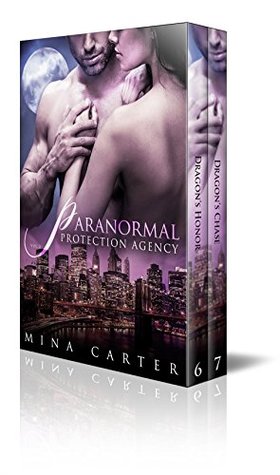 The first Paranormal Protection Agency volume wasn’t all that. More of an erotica, the platform of a Federal Paranormal agency was used mostly as just that. A platform, with very minor agency business carried out. It was more “bow chicka bow bow” than the solid Paranormal Romance/Suspense that I had expected from Ms. Mina. It was OK, but just that.

The second volume was much better to my way of thinking. The stories revolve around the Dragon twins, Duke and Baron. Abandoned only days after their birth, the boys grew up knowing nothing of who and what they really were other than that they were dragons. Research as they grew taught them they were Shadow Dragons, able to take the form of the very shadows themselves. But much searching gave little information, and no others of their kind appeared.

Hired by the PPA, they work as a team, but always as part of a larger group. Well, you can’t really blame Illiona, their boss, when ‘one’ of the twins (no, no saying which one!) has a tendency to snack on the clients pets – especially their very expensive horses . . . just sayin’. Then, they get their first solo job, guarding the daughter of a very wealthy client. Once who the police are sure is running illegal paranormal fight clubs around the city.

And here is where Dragons Honor and Dragons Chase differ from the original books. Both are strong entries in the Paranormal Romance/Suspense genre. The agency storyline comes into full bloom, the characters are more well rounded, and the world building more well defined. I completely enjoyed these two stories. Where the originals (in volume 1) has potential that was never reached, these two stories were actual stories that contained a few sex scenes while the first books were sex scenes searching for stories.

Overall, these two stories gave me confidence that I will read more Mina Carter. Not all her writing is going to appeal to me, that is a given at this point, but she wrote a couple of readable works here that I actually enjoyed quite a bit.