Review: The Blind by Shelley Coriell 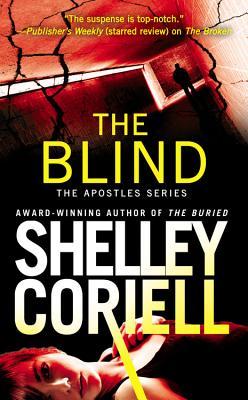 “Scapegrace leaped up. “I am the Killer Supreme! I make murder into an art form!”
Skulduggery hit him again and Scapegrace did a little twirl before falling.”― Derek Landy, Playing with Fire

“Terrorist bombings, like rampage shootings, are events that maximize the amount of publicity per amount of damage. That’s why people do them, because they know they will set off a media frenzy.” – Steven Pinker

The Apostles. A highly specialized Special Criminal Investigation FBI team, under the aegis of Parker Lord, the best that the FBI has to offer when it comes to those cases that can’t, but must, be solved. Those cases that walk the edge of destruction of everything humans hold dear. Whether serial killer or child molester, terrorist or sociopath, Parker Lord has an agent to handle it. Under direct management of the President of the United States, they go where they need to be, when they need to be there. And they don’t quit.

Coriell’s third book in the Apostles series, after The Broken and The Buried, is The Blind. And it is everything that I love about romantic suspense. Evangelina “Evie” Jimenez is a five-foot crackerjack, in more ways than one. Lord’s bomb specialist, Evie is ex-military, tough as nails, and completely focused on her work. She is the best – even though the President has, in order to cover his own backside, put Evie in ‘time-out’, smearing her name across the news and destroying her reputation. But when a bomb is ready to go off in a high school gym in Bar Harbor, Maine, the home of the Apostles, Evie goes against the President’s orders in order to disarm the bomb, an IED – a simple blow and go, the type of stuff she could do in her sleep.

The blow and go worked, just as expected. But what wasn’t expected is the man who followed her down an alley – a man with an offer. An offer that comes with a promise. Brady Malloy works for Jack Elliot, CEO of Elliot Enterprises, one of the richest companies in the world. Jack wants Evie in California, now. Because he has something that no one else has – information on the next Angel Bombing.

The Angel Bomber has terrorized Los Angeles for three months. Three women have died horrifically – blown to pieces by a sadistic bomber. Several more people have been killed or maimed. The next victim is only days from being taken, and Evie can’t turn down the opportunity to save lives, to stop the bomber. And to get her reputation back.

What follows is classic Coriell. Her women characters are strong, independent, and totally tough – but though they hide it well, they also have a soft side, an ability to empathize with victims, see both sides of situations, and do the right thing, no matter the cost. There is terror, suspense, thrills and chills in The Blind, but there is also romance, of course. If I do have one problem with this particular book it is that the romance felt rushed to the point that I found it unrealistic. From meet to love at warp speed – though people meeting under stressful circumstances often do fall for one another quickly. The thing is, love at warp speed often fizzles out just as fast.

Other than that bump in the storyline, I loved this book, just as I loved the other two. Characters from the other books make return appearances – I was thrilled that Smokey Joe is back. Blind, elderly, and full of spit and vinegar, Smokey’s ‘little accident’ (driving off a cliff – yes, driving), his constant running-off of his aides, and his refusal to move in with Kate and Hayden (from The Broken) makes his case worker decide that he can no longer live alone on his mountain. While The Apostles race to find the bomber before he kills again, Smokey Joe lends his help, throws a temper, and pretty much lends that bit of gravel to the character list. Awesome. It is going to break my heart when he passes away one day. I hope Shelley keeps him around as long as possible!

This book was received from the publisher in exchange for a realistic review. All thoughts are my own. Shelley has solid “shelf” space in my reader any time she publishes a new book!

A former newspaper reporter, magazine editor, and restaurant reviewer. These days Shelley writes smart, funny novels for teens and big, edgy romantic suspense. A six-time Romance Writers of America Golden Heart Finalist, she lives and loves in Arizona with her family and the world’s neediest rescue Weimaraner. When she’s not behind the keyboard, you’ll find her baking high-calorie, high-fat desserts and haunting local farmers markets for the perfect plum.