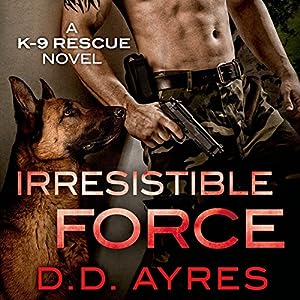 “Your mission is clear cut and well defined. The set of philosophies you develop in order to achieve  that mission will determine whether you make a beneficial contribution to the role police dogs play in modern law enforcement or whether you become a liability which undermines the good work of many men and women before you.” – Bruce Jackson, Pierce County Sheriff’s Department, Washington

I love stories with animals. A story with a military or police dog? Even more. Humans choose to be police or military. Their dogs do it out of love. Love for their handler first and foremost. Love for their work, pride in what they do. They lay their lives on the line for the handlers they love.

Bogart is just such a dog. A Belgian Malinois, Bogart has been police officer, best friend, and companion to Officer James Cannon in their positions with the Charlotte-Mecklenburg Police Department. Now, Bogart has been kidnapped, and James will do anything, including going against direct orders, in order to track down and bring back Bogart.

Finally locating Bogart at a small cabin outside of Raleigh, James intends to arrest the woman he believes is his kidnapper. But things aren’t like he thinks – and Bogart, or “Prince” as he is now called – is determined to protect not only James but also Shay, the woman who rescued him from the doggie gas chamber and brought him home with her.

The story is a bit typical, but I identified with Shay. Her history, ongoing terror and hyper-vigilance are well done, and punched me in the heart. Her stalker? Very believable, as was the treatment she went through at the hands of the police as a

child. There could have been a well-written literary novel built on these same bones, going further into Shay’s background and what happened to her throughout her life. I would have really enjoyed that very much. James was a good guy, very patient with a deeply damaged Shay. His obsession with getting Bogart back was believable, including his ‘not quite legal’ stalking of Shay, as was Shay’s determination to keep the dog she rescued from the doors of the gas chamber. All in all, I enjoyed the book, though it isn’t one I would call ‘outstanding’. Bogart/Prince was the best part of the story, and the narrator’s pronunciation of the German terminology used in handling Bogart was beautifully done. Jeffrey Kafer is an excellent narrator, and I am always interested to hear what he is narrating next.

Those who gave their lives

To learn more about K-9 heroes, both police officers and military dogs, click on the heading, or the photo. These wonderful dogs have all given their lives to protect their handlers, other officers, soldiers and civilians. They are TRUE heroes. Often, the handlers who die in battle do so saving their partners and best friends – just as their canine companions would do for them.

“Called To Give My All”

I am a deputy in a canine crew.
I’ve been trained to see it through.

When danger’s near my ears perk up,
they taught me that as a little pup.

I’m often there to protect your rights,
my presence sometimes hinders fights.
I never attack with thought to kill,

when subduing one, my job I fill.

I never worry a single thought,
as to how I’ll fare at a certain spot.
The love I have for a handler’s care,
is all I need, each day to fare.

And if some day my luck turns bad,
I’ll relish all the joys I’ve had.

To be with men who stand for
good, in a special kind of brotherhood.

The story’s end by now you know,
of how I tried for a better show.

I did my best, though I did fall,
when I was called and gave my all.